Dubrovnik, in the Dalmatia region of Croatia, is recognised by UNESCO as a town of special interest. It is home to many historical monuments, such as Orlando’s Pillar. It also contains a number of ancient palaces and fascinating museums.  On the many available day trips from Dubrovnik  there are some wonderful sights to be seen. Not far from the city is the Pelješac peninsula, where the stone town of Ston is situated. South of Dubrovnik is Mljet Island. This is where you will find a famous Benedictine monastery dating back to the 1100s, established on an island in the centre of a lake.

Dubrovnik is famed for its Ston oysters and mussels, said to be the Adriatic’s best shell fish. It is also known for its frog and eel stew, originating in the Neretva valley. It is here that you will find more sweet pastries than any other seaside town. The best known are Kotonjata and Rožata, while Arancina and Mantalata cakes are also very popular. The best wines in this part of Croatia are Pelješac’s Postup and Dingac, as well as Korcula’s Grk and Pošip. Dubrovnik itself produces the very fine malvasia, from Konavle.

Mostar is a very easy day trip destination from Dubrovnik. As it is situated in Bosnia and Herzegovina, you will need to bring along your passport. This city, listed as a UNESCO World Heritage site, is a fascinating place to walk around as it is here that you will find the Turkish House, Old Bazaar and a number of beautiful mosques. Soak up the atmosphere of the city while wandering around the quaint craft shops, or savour a Turkish lunch in the way the locals would at any one of the many restaurants. Over the millennia, various religions and cultures have met here, meaning that today it has quite multicultural feel.

Off the Adriatic Coast is the day trip destination of Korcula Island, noted for its rustic streets that are laid out in a fish bone pattern. This is also said to be the place where Marco Polo was born. The city of Korcula, also located on the island, is one of the prettiest cities on this coast that dates back to the Middle Ages. The city’s patron saint is Saint Mark, and a beautiful Cathedral built in his honour stands here. A host of myths and stories surround Korcula, due to its long history and sheer beauty. To get to Korcula Island from Dubrovnik, catch a bus to Orebic. From here, you can get to the island by ferry.

Montenegro is often overlooked as a day trip destination amongst visitors to Dubrovnik, although it is just one hour away by car. Mountains slope right down to the sea in this immensely historical and cultural area, which is a UNESCO World Heritage Site. On one hand it is a great pity that Montenegro is one of the places less visited, as it does not receive the appreciation that its great beauty deserves. However, admirers who come back again and again are enjoying the peace and quiet while they can! As time goes on, Montenegro’s attractions are slowly becoming more well known, so visit now before it starts to buzz with tourists. 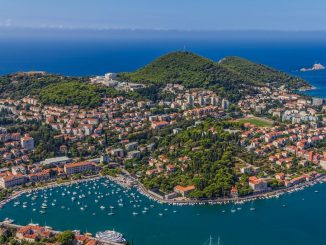