Anne Frank is synonymous with the city of Amsterdam. This young girl and her family hid from Nazi forces at Prinsengracht 263 for over two years but they eventually were discovered. She and her sister were sent to  Bergen-Belsen concentration camp where she died. While in hiding Anne kept a diary. This was subsequently discovered by her father who survived the camp and was sent to a publisher. It became a world wide phenomenon and was translated into numerous languages as well as influencing a number of screen plays and theatre productions. Today the Anne Frank Huis is a memorial to this terrible period, including many of her own belongings on display, a map where her father monitored the progress of the Allies and an exhibition on the holocaust.

The Van Gogh Museum is a must if one wishes to discover more about the life and times of Vincent Willem van Gogh. This brilliant but very troubled artist sliced a section off one of his ears during one particularly notorious period of insanity. He also endured many very dark periods that resulted in alcoholism, psychosis, self harm and eventually led to his killing himself. Despite these episodes – or maybe as a result of them – he produced a large number of globally famous works, such as Sunflowers. The museum has a range of temporary and permanent exhibitions that attract many thousands of visitors every year.

The 32 hectare Keukenhof Gardens are a Mecca for flower lovers. Seven million flower bulbs together create a feast for the senses. Visitors can take in the monuments scattered around the grounds, admire that year’s theme pavilion, or wander around the flower shows. A playground and treasure hunts are also laid on for children, as well as a hedge maze and petting zoo. If you don’t fancy walking around the area, you can take a boat cruise or hire out a bike to discover all that it has to offer, such as floral mosaics.

There is much to explore in Amsterdam’s Centrum other than the famous and very beautiful canals. In the inner city you will find many fascinating and sometimes quite unique museums. There are also a number of atmospheric markets – for example the Noordermarkt. In order to find some real gems when seeking some retail therapy it is necessary to seek out the streets less travelled, and you will certainly find some of them here. Hidden in the Negen Straatjes (‘Nine Streets’) or the Jordaan are the shops where you will come across one of a kind items of clothing. If you are an art connoisseur you must make a bee line for the Spiegelkwartier (‘Mirror District’), with more galleries than anywhere else in the city. The vibrant Zeedijk, is the Amsterdam equivalent of Chinatown, which even has its own temple. Down the road is the imposing Openbare Bibliotheek (‘Public Library’) which offers awesome views of Amsterdam.

To find out about the origins of Amsterdam as a humble site beside the Amstel River and its development over the centuries to become an energetic, cosmopolitan city, head to the Amsterdam Museum. A huge number of artworks, artefacts and mementoes together tell the story of the city. Photographic and motion picture archives recall the many highs and lows of its inhabitants which made Amsterdam what it is today.

The Cultural City Of Amsterdam Netherlands 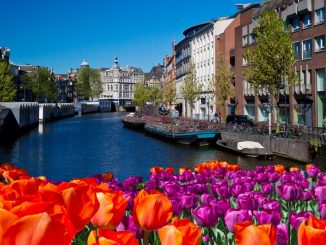