If you are looking for things to do in Florence Italy just look around. The city is full of museums, art, sculpture, churches and historic buildings which will amaze and fascinate you. Here are a few of the places you might visit on your trip.

Not only is the Uffizi Gallery museum Florence’s most significant museum, it is also its most popular. Work on the Uffizi Palace, brainchild of Giorgio Vasari, began in 1560 under orders from Cosimo de’ Medici. Although the original purpose of the building was a central location for offices of administration, a number of rooms on the third floor were used to store the Medicis’ most prized artworks. These were added to over time by other members of the clan. 200 years later, in 1737, Anna Maria Luisa, the last of the Medicis, left the masterpieces and the palace itself to Florence in her will.

The 15th century building that houses the Museum of San Marco is a tourist attraction in itself; let alone what is inside. It originally was a Dominican convent, and later was completely renovated and extended for Cosimo the Elder de’ Medici. As a result it is completely intact, giving the visitor an insight into the layout of a convent from this period in time and what life must have been like within the walls. The cloister, as well as the bright library, together make this one of the best preserved Renaissance interiors.

The Accademia gallery dates from the late 18th century, when the convent of San Niccolò di Cafaggio and friary of San Matteo were converted into a space where those studying at the Accademia delle Belle Arti could examine history’s finest masterpieces. Nowadays, it is most popular with those visiting Michelangelo’s David, by far the most well known exhibit in the museum. However, five other Sculptures by Michelangelo are displayed here; Saint Matthew and the four unfinished Prisoners. There is also a very fine collection of Renaissance and Gothic artworks that used to belong to the Medici family.

In the Bargello Museum, in Palazzo del Bargello, you will find many Renaissance sculptures and paintings. The building dates from the mid 13th century, and was used by a number of Departments of Justice. In the late 16th century, it was turned into the residence of the Captain of Justice and a gaol. Nowadays one can admire the very attractive courtyard, the walls of which are embellished with the many coats of arms of judges who have served over the years.

The massive Pitti Palace is amongst Florence’s biggest buildings. When built in the mid 15th century, it was the home of the Pitti family and only took up the centre cube of the modern day structure (or the seven windows in the centre of the uppermost level). Near the mid 16th century, the Medici family bought it, after which it served as the main home of the Grand Ducal clan. During this time a number of extensions and other alterations, such as the pair of lateral wings and the extravagant courtyard, were made. Cosimo II de’ Medici commissioned the building of the piazza and the view was opened up. The House of Lorraine added on the pair of projecting wings in the early 1700s. The legendary Boboli Gardens are located behind the palace. 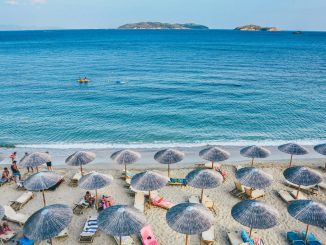 The Best Beaches in Crete