If you are visiting Portugal Albufeira, capital of the Algarve is one place you should consider visiting. As well as being a beautiful sunny holiday resort with sandy beaches, it is a city with a rich heritage and history.

Albufeira’s location on the coast means that it is relatively easily accessible by a number of different nationalities. First came the ancient Romans, who established a settlement that they named Baltum. The Romans were great administrators; they brought to the newly founded Baltum innovative farming methods, as well as establishing mines and businesses. Even today, one can still see evidence of the streets, bridges and aqueducts that they built. Over the millennia, Baltum’s citizens were also heavily influenced by the Greek, Carthaginian and Phoenician peoples, who gave them the concepts of money, preserving food with salt, and the alphabet.

As Baltum began to trade with coastal North African countries, the Moors migrated here, quickly spreading along the Algarve. They referred to the town as Al-Buhera; meaning Castle of the Sea. It is thought that this was a reference to a fortress then in existence. At that time this fortress stood on top of an imposing rock, which overlooked the lagoon in the town’s low-lying section. Over time, the name ‘Albufeira’ came into being. The Moors also made their own contributions to farming practices in the region, as they introduced new methods of cultivating the land, ploughs, fertilizers and water wheels (used to bring water up from wells deep under the ground).

Around the end of the 1100s, Christians arrived in the Algarve. Many years of battles ensued, before the Moors were finally defeated by the Knights of the Order of Santiago in 1249. Albufeira was now officially subsumed into the United Kingdom of Portugal, Brazil and the Algarves. On August 20, 1504 (today still celebrated as a municipal holiday), Albufeira was granted its own charter, meaning that from now on it followed the same laws as everywhere else in Portugal. It must be said that Albufeira has suffered more from natural catastrophes than most other towns in Portugal’s south. By far the earthquake that occurred in 1755 dealt the biggest blow to the town; flooding ensured that almost no buildings survived. The scale of devastation severely limited the town’s regeneration efforts. However, in the mid 1800s, fishing began to contribute to the local economy, and finally Albufeira’s fortunes changed for the better. For the next century, drying fruit and fishing remained the region’s main industries.

In the 1960s, the Algarve developed a fledgling tourist industry. As word spread of all that Albufeira has to offer, attracting ever more tourists with much needed currency, the town’s economy boomed. By 1986, Albufeira had grown to the size where it could now be classed as a city. Even today, it is still growing and developing to include areas such as Areias de São João, Oura and Montechoro.

It is estimated that each year, about 5,000,000 people visit the Algarve; a large portion of them stay in Albuferia. Tourists used to arrive here only in the summer months; however, now that winter sun holidays and long weekend breaks are equally as popular, Albuferia receives visitors throughout the year. With an allocation of over 3000 sunny hours annually, and an eternally genuine welcome from the locals, it is not hard to see why. 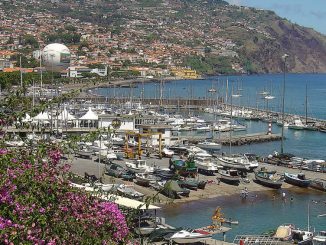 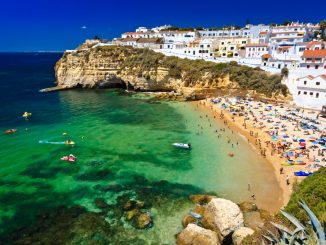 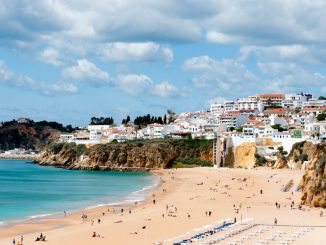