The International Museum of the Reformation is situated on the ground floor of the very impressive Maison Mallet. This is located beside Saint-Pierre Cathedral, on Rue du Cloître. Through various artefacts such as writings, primitive prints and artworks, this museum teaches the visitor about the cultural and religious reasons for the Reformation, and how Geneva played a key role in its advent. It also describes the cultural and religious changes that were brought about as a result. There are also much more modern exhibitions for all the family, such as educational movies, workshops and rooms where one can listen to music associated with this seminal event in history. Mobility impaired can easily get around the museum. It is open Tuesday to Sunday (December 24, 25 and 31 and January 1 excluded) from 10am to 5pm.

In Parc des Bastions, you will find the University of Geneva liberal arts campus. Not only this, if you are a fan of chess you can have a game on one of the oversized chessboards. History buffs can admire the tall sculptures of venerated Calvinist figures. These men played an important role in Geneva‘s history. Located beside Place Neuve, this lush park also links Plaine de Plainpalais and the Old Town. Hence it is a great place to wander around while walking from one district to the other.

The Museum of the International Committee of the Red Cross, on  Avenue de la Paix, is amongst Europe’s finest. This is because it documents in almost forensic detail how the I.C.R.C. has helped both local communities and entire countries through bloody conflicts, earthquakes, tsunamis, hurricanes and other catastrophes. It does this through both photo, film, articles and interviews with both survivors and volunteers. Although the exhibitions do not hold back in telling these graphic stories, they are also admirably objective; greatly adding to the reliability of the information.

Bois de la Bâtie is located on the opposite bank of the river Arve to Jonction. The majority of this tree covered hill is still as nature intended, with the addition of hiking paths on its perimeters. These paths form a network. They all meet at a walkway that links Bois de la Bâtie to the St. Jean district, via a railroad bridge. At the westernmost reaches of the hill is a modest zoo. If you are a lover of nature and outdoor activities this is one of the best places to visit In Geneva.

Musée Ariana, on Avenue de la Paix (halfway between the Museum of the International Committee of the Red Cross and Place des Nations), is home to a massive range of European and Eastern glass and ceramics. It is estimated that there are around 20,000 pieces in all. The exhibits cover over 700 years of glass and ceramic production, and all of the most popular manufacturing methods. As a result, this is one of Europe’s most significant museums dedicated to earthenware. The museum itself, which was designed by Gustave Revilliod using a combination of Neo-Baroque and Neoclassical features, is also an attraction in itself as it is quite different from the surrounding structures. The Musée Ariana is open Wednesday to Monday from 11am to 5pm and it is one of the most popular places to visit In Geneva. 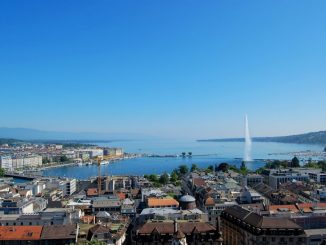